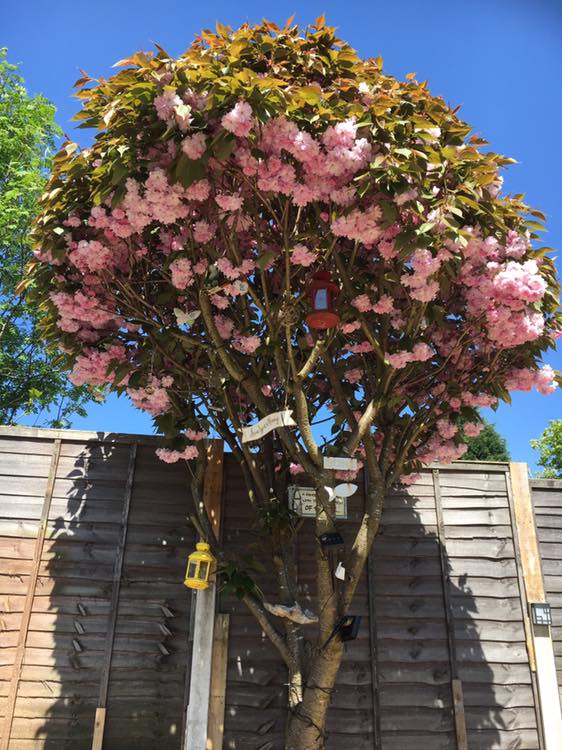 The picture is my tree of life for Sean and Kirsty, Cherry Blossom Tree just coming in to bloom. Planted in 2000 ❤️

This post might be hard for some of you to read. I thought long and hard about it, how to write it and even whether to write it. But I know I wouldn’t be where I am today if these things hadn’t happened to me. I also know that what happened, although it felt unique in its awfulness, is actually very common. The loss of premature babies is very common, very untalked about. It’s especially difficult for men to talk about it, but the pain and, for me the guilt, was there.

So I am going to tell the story. If you have gone through, or are going through something similar I urge you to NOT do what I did. Don’t keep it inside and bottle up the torrent of feelings. Get in contact with someone who can help you. Start by contacting me. I may well be able to help clear your emotions or recommend someone who can.

So here goes. Here is the first part of my story.

Its January 1998 my then wife is pregnant; I get a call from her saying she is bleeding and going to hospital. So I pack up my work tools and let her know I will meet her at the hospital. ‘Nothing to worry about,’ I say to myself, ‘she’s spotted before and this will be our third child . . .’
This is the beginning of the point at which my whole world stopped and I would change forever. The next thing was four days in hospital with no sleep; my mum was by my side 24 hours a day. My wife is drugged up so much she is barely conscious. We have to get the baby to 30 weeks, we were told.
My wife was only 25 weeks pregnant. We were advised by the doctors that the baby could be blind, disabled, the list went on and on. I was on my own, as my wife was as good as unconscious. A decision had to be made. My mum just said; whatever decision I made be the right one.
Time stood still. But the baby was on the way. He was going to be born.

It was explained to me that he may already be dead. If he was alive the chances were he would need a vast number of operations and there was always that question of Quality of Life, would he even have one??

The baby was born.

I chose not to have the crash team there when he was born . . . just let the will of life take its course and see what prevails.
That fateful day, the 7th February 1998 Sean was born, he took just a few short breaths, he was perfectly formed and beautiful then he passed away.
Now I pick up the pieces. I have to be strong. After all, I can’t let my two daughters down; I can’t let my wife down.
My full bucket of problems was now overflowing, we ticked along trying to come to terms with what had happened but no answers came.
It is now January 2000, my wife is now 19 weeks pregnant. The pregnancy is not planned but maybe this is the answer to all the pain.

Kirsty was born dead on the 19th January. Another premature baby, again perfectly formed but at only 20 weeks.
How did I feel? Numb! Yes Numb! How do I tell my two beautiful daughters again that they won’t have a sibling to play with . . .
We said goodbye to Kirsty a week later. No parent should ever have to bury their children.
Guilt has now hit me. It’s all my fault, I keep saying to myself, ‘ I should have looked after my wife better!’ But I know that was grief talking.
We tick along . . . My wife goes to SANDS (the stillbirth and neo-natal deaths charity) for counselling.
I didn’t go for counselling. I have to be strong..

Then a miracle happened my son Michael was born on 25th January 2002.
It was not easy, not easy at all. My wife had been in hospital for seven months whilst I juggled looking after two kids and holding down a full-time job. The bucket of my life is truly overflowing and without my mum, I know I couldn’t have done it.

I tick along . . . but no matter how much joy my three children give me I still feel guilty over Sean (not about Kirsty, because there was not that decision to be made?) I can’t get the thought out of my head that I made the wrong decision.
Still, I do not talk about it. And the pressure is building, like the snow building up to an avalanche it is silent, it is unseen. But the catastrophe is building up. It is ahead, waiting to swamp me.

I tick along……..I throw myself into my family and my hobby of Koi Keeping.
2003 I start to import koi from Japan and it’s going great! I open a shop, all is good but still can’t get it out of my head that I made the wrong decision.
Guilt is really dragging me down now…

I decided my family was better off without me;my mum owned a mobile home in Newquay Wales.
It is now September 2009 and I travel on my own to the mobile home on the Saturday and decided that on the Wednesday I will end it! (yes I was that calm about it)
The Wednesday came, I got up, went in to Newquay Bay to have some chips one last time, I sat on a bench eating my chips still feeling calm.
The bay has bottle nose dolphins which came in to play, it is a true sight to behold.
So, I’m sitting on the bench and see 2 dolphins come in to the bay and you could see them so clearly. As I ate my chips watching the dolphins play I thought, how wonderful it was and that I must tell the kids what a beautiful sight I saw.

I came home and sought help, Counselling for 8 weeks to feel even more guilty. Anti-depressants, Citalopram first 10mg then 20 mg then 30 mg, ashamed of what I have become, nothing could move me I barely functioned.
2010 I still feel guilty, why oh why did I not get the crash team in.

I try self-hypnosis from some books I’d bought a few years back, it helped but not enough, I looked at learning hypnosis but too costly, I went on with my life not great just surviving what more can you ask for.

2011 I’m feeling ok within myself but was still on medication, then I started to lower my dose and eventually came off them altogether but there it is still, GUILT! Why did I not get the crash team there?!..

Then I met a lovely lady whom I’m still with, she somehow puts up with me..
I’m on my knees financially and emotionally but she says she sees something in me, a great and confident man that was once there.

Her bonkers infuriating ways made me look up again and I realise that I’m not all bad but there it is GUILT… Why oh why did I not get the crash team there?!..

I tick along doing windy staircase waterfall scripted hypnosis and did get great results but I knew there had to be better ways and quicker. I then stumbled on Karl Smiths course through a hypnosis friend who had attended his course on Kinetic Shift. I attended the course in York 2016 where I meet amazing people and now call them friends and I would say for me it was a life changing weekend, as on this weekend my Guilt Stopped..
The technique Karl showed us was utterly brilliant but I wasn’t willing to try it on such an epic thing in my life just in case the tears flowed. Then..
Lorna Harvey and I were practicing when I said to her it was a 10.. She went through it perfectly and then it was gone!! I was shocked, stunned, no tears just joy.

I now shoot from the heart and every client gets my heart.

This website uses cookies to improve your experience while you navigate through the website. Out of these cookies, the cookies that are categorized as necessary are stored on your browser as they are essential for the working of basic functionalities of the website. We also use third-party cookies that help us analyze and understand how you use this website. These cookies will be stored in your browser only with your consent. You also have the option to opt-out of these cookies. But opting out of some of these cookies may have an effect on your browsing experience.
Necessary Always Enabled
Necessary cookies are absolutely essential for the website to function properly. This category only includes cookies that ensures basic functionalities and security features of the website. These cookies do not store any personal information.
Non-necessary
Any cookies that may not be particularly necessary for the website to function and is used specifically to collect user personal data via analytics, ads, other embedded contents are termed as non-necessary cookies. It is mandatory to procure user consent prior to running these cookies on your website.
SAVE & ACCEPT